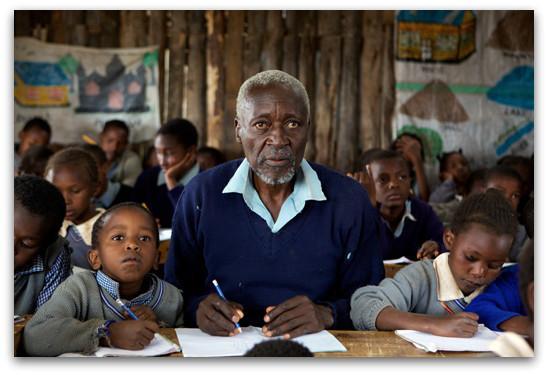 On May 16, hundreds of education advocates, including GCE-US and the National Education Association, gathered at the National Geographic Society for a special screening of the new feature film of ” The First Grader.”  This powerful film tells the story of Kimani Maruge, a Kenyan Mau Mau who fought for his rightful place in a classroom after Kenya abolished school fees. Maruge became the oldest man ever to enroll in primary school at the age of 84.

Following the screening, director Justin Chadwick (The Other Boleyn Girl), producer Richard Harding, and star of the film Naomie Harris (28 Days Later and Pirates of the Caribbean) participated in a panel discussion on the film. During the discussion, all three of the panelists called on the audience to speak out in support of Education for All:

“For me, there were two main messages. The importance of education, and its great to see the passion that children bring to learning… They love it, and they are so hungry for knowledge.” - Naomie Harris

You can help spread the word about the film and about the importance of education by watching and sharing the film trailer on YouTube. Each time the trailer is viewed on YouTube Capella University will donate 50 cents to three organizations that promote literacy and education: Reading is Fundamental, South Sudan Institute, and Kakenya Center for Excellence. Click here to watch the trailer!